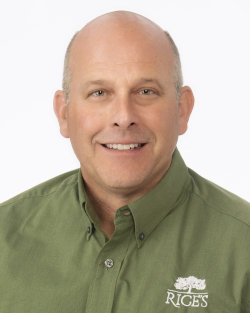 For Bryan Rice, landscaping is a family business. Having worked at Rice’s throughout high school and college, he officially joined the business in 1988, after graduating from Ohio State University with a bachelor’s degree in landscape horticulture. Now, as president, Bryan leads the company’s daily business operations, while motivating his team to strive for success by delivering exceptional customer service.

Active in the industry, Bryan has served as president and board member of the Ohio Nursery and Landscape Association. He currently serves on the organization’s Budget, Policy & Review, and Legislative committee. Bryan has lobbied for change at both the state and federal level, earning him the Grassroots Volunteer of the year award.

Throughout his career, Bryan has been recognized for his work in the community. He serves on the Buckeye Council board and Aultman Health Foundation board of directors. He’s an active supporter of The Boy Scouts of America, the Angel Auction, The Akron Canton Regional foodbank center, Arts in Stark, United Way of Stark County, and the Catholic Charities. In 2016, he received the Entrepreneurial Spirit Award from the Wilderness Center.

While he’s not at work, you’ll often find Bryan smoking – meat, that is, including brisket, chicken and ribs. He has competed in KCBS BBQ competitions in Ohio, Michigan and Alabama. You will also find Bryan, his wife Tracey and their son JT enjoying the outdoors hiking and snowboarding.